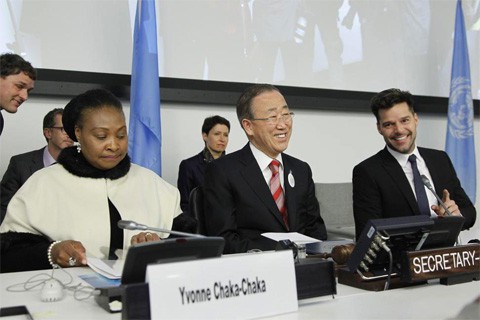 I'll post a video if it becomes available, but following are his remarks, in full:

Thank you all for coming to this remarkable meeting. What a meaningful way to commemorate Human Rights Day. I welcome all of the activists, supporters and others here today.

The very first article of the Universal Declaration of Human Rights proclaims that, “All human beings are born free and equal in dignity and rights.”

All human beings – not some, not most, but all.

No one gets to decide who is entitled to human rights and who is not.

The United Nations has a proud record of combating racism, promoting gender equality, protecting children and breaking down barriers facing persons with disabilities. We have a long way to go in all of these areas. But we are turning the tide on discrimination in both law and practice. Slowly, some old prejudices have started to dissolve.

Yet others remain in place, with horrendous consequences.

Around the world, lesbian, gay, bisexual and transgender people are targeted, assaulted and sometimes killed. Children and teens are taunted by their peers, beaten and bullied, pushed out of school, disowned by their own families, forced into marriage … and, in the worst cases, driven to suicide.

LGBT people suffer discrimination because of their sexual orientation and gender identity at work, at clinics and hospitals, and in schools – the very places that should protect them. More than 76 countries still criminalize homosexuality. I am pained by this injustice. I am here to again denounce violence and demand action for true equality.

Let me say this loud and clear: lesbian, gay, bisexual and transgender people are entitled to the same rights as everyone else. They, too, are born free and equal. I stand shoulder-to-shoulder with them in their struggle for human rights.

I am proud that as Secretary-General I have a global platform to highlight the need to end violence and discrimination based on sexual orientation and gender identity.

The United Nations should lead by example. I recently reiterated to all senior managers that discrimination against staff on the basis of sexual orientation will not be tolerated.  I have also asked that the UN’s rules and policies be examined to ensure that the rights of our LGBT staff are protected.

The High Commissioner for Human Rights published the first UN report dedicated to the problem, which was then debated at the Human Rights Council, marking another UN first.

The past decade has seen far-reaching reforms in Europe, the Americas and a number of Asian and African countries … and extraordinary shifts in social attitudes in many parts of the world.

I applaud Argentina for introducing some of the most progressive legislation in the world on same-sex partnerships and gender recognition. I am pleased that we are joined today by Blas Radi, from Argentina, who helped drive the gender identity law adopted there earlier this year.

In a number of countries, including Ukraine, draft laws have been proposed that would criminalize public discussion of homosexuality – potentially making meetings such as this one illegal. I deplore these kinds of measures wherever they are introduced. They threaten basic rights, feed stigma and lead to more abuse.

We are also pleased to have Gift Trapence, a prominent human rights defender from Malawi. When I visited Malawi in 2010, two young men had just been sentenced to 14 years of hard labour for the so-called “crime” of celebrating their wedding. At my request, the then President Bingu wa Mutharika pardoned them, on the very day when I asked him, but he defended criminal sanctions. Now under the new leadership of Her Excellency President Joyce Banda, Malawi is weighing possible changes in the law. I hope Malawians take the opportunity to turn a page.

We must all speak out against homophobia, especially those who are considered leaders in society as well as others in the public eye.

Let me say a big Bienvenido to pop sensation Ricky Martin.  Muchas Gracias! You are a wonderful role model for LGBT youth and for all people. Thank you.

I am again honoured to share the stage with Yvonne Chaka Chaka – a global superstar and a champion of development, including as a Goodwill Ambassador for UNICEF and Roll Back Malaria. Thank you very much.

Yvonne, you are known as the Princess of Africa. Today, you are our Queen of Equality.

Our guests – and you here today – have helped to open a door. We cannot let it close.

It is an outrage that in our modern world, so many countries continue to criminalize people simply for loving another human being of the same sex. In many cases, these laws are not home-grown. They were inherited from former colonial powers. Laws rooted in 19th century prejudices are fuelling 21st century hate. In other cases new discriminatory laws are being introduced. These laws must go. We must replace them with laws that provide adequate protection against discrimination, including on the basis of sexual orientation and gender identity.

This is not optional. It is a State obligation, based on the principle of non-discrimination – a fundamental tenet of international human rights law.

When I meet with leaders from around the world I raise my voice for equality for LGBT people. Many leaders say they wish they could do more. But they point to public opinion as a barrier to progress. I understand it can be difficult to stand up to public opinion. But just because a majority might disapprove of certain individuals does not entitle the State to withhold their basic rights.

Democracy is more than majority rule. It requires defending vulnerable minorities from hostile majorities. It thrives on diversity. Governments have a duty to fight prejudice, not fuel it.

I am deeply grateful to the cross-regional LGBT core group of Member States for bringing us together. I hope many other countries will join you.

You and I and people of conscience everywhere must keep pushing until we realize the promise of the Universal Declaration of Human Rights for all people.  The freedom, dignity and equal rights that all people are born with – must be a living reality each and every day of their lives.

Thank you very much.

Previous Post: « Will Obama Weigh in on the Proposition 8 Case?
Next Post: Ricky Martin Speaks at UN Forum on Homophobia: VIDEO »