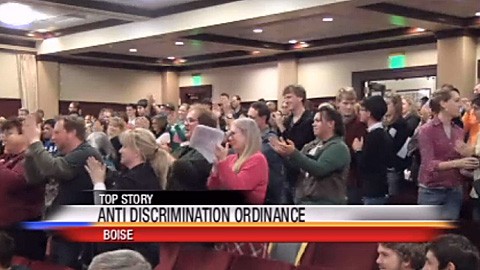 Boise, Idaho's City Council took a big step forward last night, passing an ordinance protecting LGBT people from discrimination in employment, housing, and public accommodation before a packed house that rose to gave it a standing ovation when the vote was over.

Following unanimous passage of the ordinance, the standing-room-only crowd in the State Capitol’s west wing auditorium stood and cheered. Jordan and fellow councilwoman Lauren McLean, who spearheaded the effort to draft the ordinance, said it is something Boise has lacked and will help the city’s standing with companies considering whether to open new establishments here. Churches, private organizations such as The Boy Scouts of America and other governments operating in the city are exempt from the law, which takes effect Jan. 1.

Boise is the second city in the state (and the largest) to pass such an ordinance. The first was Sandpoint.

Watch reports from KBOI and NWCN, AFTER THE JUMP…

Previous Post: « Second Federal Court Ruling This Week on ‘Ex-Gay’ Therapy in California Brings Differing Conclusion
Next Post: You Can’t Be Gay Unless You Have a Job: VIDEO »