Supreme Court Justice Antonin Scalia appeared at Princetown University on Monday and was asked by a gay student, Duncan Hosie ’16, why he equates laws banning sodomy with those barring man-on-animal sex and murder. 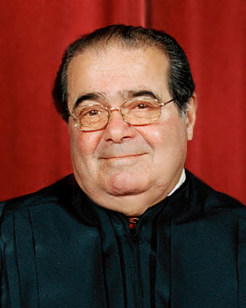 Some in the audience who had come to hear Scalia speak about his book applauded but more of those who attended the lecture clapped at Hosie’s question.

“It’s a form of argument that I thought you would have known, which is called the `reduction to the absurd,’” Scalia told freshman Duncan Hosie of San Francisco during the question-and-answer period. “If we cannot have moral feelings against homosexuality, can we have it against murder? Can we have it against other things?”

Scalia said he is not equating sodomy with murder but drawing a parallel between the bans on both. Then he deadpanned: “I’m surprised you aren’t persuaded.”

MSN reports: "Hosie said afterward that he was not persuaded by Scalia's answer. He said he believes Scalia's writings tend to 'dehumanize' gays."

As Scalia often does in public speaking, he cracked wise, taking aim mostly at those who view the Constitution as a ‘‘living document’’ that changes with the times.

He said that people who see the Constitution as changing often argue they are taking the more flexible approach. But their true goal is to set policy permanently, he said. ‘‘My Constitution is a very flexible one,’’ he said. ‘‘There’s nothing in there about abortion. It’s up to the citizens. … The same with the death penalty.’’