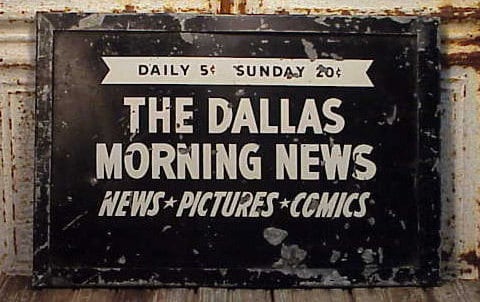 In January of 2011, the Dallas Morning News made waves by announcing that it would not publish same-sex marriage announcements because same-sex marriage remains unrecognized in Texas. It was six months before public outrage forced the paper to change their policy.

Today, about two years on, the paper made another big announcement: they’re endorsing marriage equality.

Same-sex marriage has been percolating at the state level for several
years, leading to a patchwork of laws that create more confusion than
clarity. The court can undo that confusion by determining the
constitutional parameters of this issue.

We urge the Supreme Court
to affirm the right of gay couples to marry based upon the fundamental
American ideal of equality before the law. It is critical that the court
also make clear that such a ruling won’t require churches whose
doctrines oppose same-sex marriage to perform such ceremonies.

The paper’s editorial also highlights the broadsheet’s own support for inclusion – they opposed a constitutional amendment prohibiting same-sex marriage and support non-discrimination policies in their workplace – and concludes, “What’s at stake before the Supreme Court is how a secular society should respond to the growing demand for same-sex marriage.”