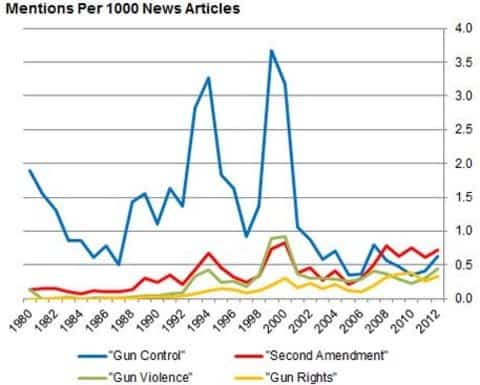 In the wake of yesterday’s shooting at Sandy Hook Elementary, a tragedy most of us are still trying to process, statistician Nate Silver decided to look at the use of the terms “gun control,” “second amendment,” “gun violence” and “gun rights” in news stories over the past three decades.

In 1993 and 1994, when Congress was debating a ban on assault
weapons, the phrase “gun control” was used about three times per 1,000
news articles. Use of the term was even higher after the mass shootings
in Columbine, Colo., peaking at 3.7 instances per 1,000 articles in
1999. It reached a low point in 2010, when the term “gun control” was
used 0.3 times per 1,000 articles — less than one-tenth as often as in
the year after the Columbine shootings.

Averaging the frequency of
usage over a five-year period reduces the effect of these news-driven
fluctuations and reveals a reasonably clear long-term trend. In recent
years, the term “gun control” has been used only about half as often as
it was in the 1980s and about one-quarter as often as in the 1990s and
early 2000s. [See below]

The term “Second Amendment” was rarely employed in the 1980s, but it has
become much more commonplace since then. (Since 2008, the term “Second
Amendment” has been used more often than “gun control.”) A related
phrase, “gun rights,” has also come into more common usage.

He concludes that the language game has helped shape the debate: “The polling evidence suggests that the public has gone from tending to back stricter gun control policies to a more ambiguous position in recent years. There may be some voters who think that the Constitution provides broad latitude to own and carry guns – even if the consequences can sometimes be tragic.”

Last April, after Trayvon Martin’s shooting, Jill Lepore at The New Yorker looked at how the right-wing in the mid-late 20th Century successfully turned the “second amendment” into a political bargaining chip, forever altering the gun control debate in this country.

“The assertion that the Second Amendment protects a person’s right to own
and carry a gun for self-defense, rather than the people’s right to
form militias for the common defense, first became a feature of American
political and legal discourse in the wake of the Gun Control Act of
1968, and only gained prominence in the nineteen-seventies,” she wrote. 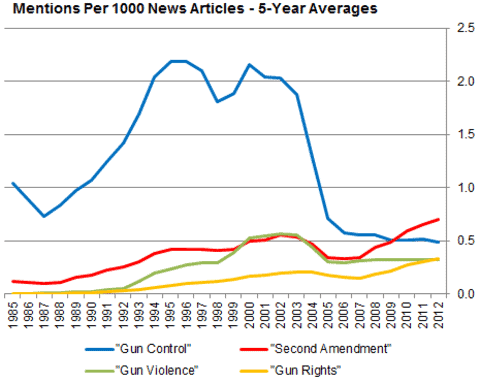