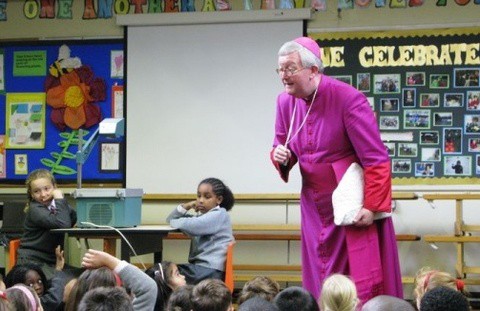 There’s some more dystopian doom and gloom about marriage equality coming from the Catholic Church in England. Days after Archbishop of Westminster Vincent Nichols called conservative plans to legalize same-sex nuptials an “Orwellian plot,” Roman Catholic Archbishop of Birmingham Bernard Longley is claiming that men marrying men and women marrying women will lead to unforeseen consequences because children of the future won’t have both a mom and a dad because the nuclear family will be obsolete and forgotten. Or something.

“Government policy cannot foresee the full consequences, for the children involved or for wider society, of being brought up by two mothers without a father’s influence or by two fathers without a mother’s influence,” he says in a letter to be read during Feast of the Holy Family services across Birmingham tomorrow.

“We first learn about diversity and acquire a respect for difference through the complementarity of our parents,” says the stressed out Archbishop, according to The Telegraph. “The complementary love of father and mother is a precious gift that we should wish for every child.”

Because in Longley and company’s vision of the future, gay marriage has become the norm and straight people are no longer raising children and up is down and black is white and aliens are running the world’s governments. It’s even crazier and more nightmarish than anything Orwell could dream up and, like Orwell’s work, complete fiction.