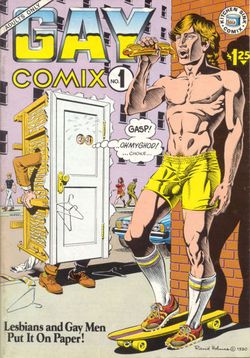 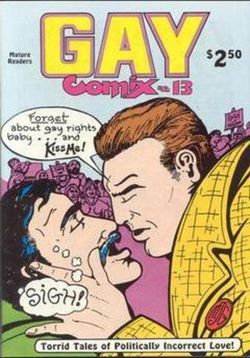 Marvel Comics writer John Byrne has previously said he always planned to make superhero Northstar, introduced in 1979, gay, but that corporate and cultural forces kept him in the closet until 1992.

Up to that point, Northstar's sexuality had only be hinted at, often in a denigrating manner, like when his twin sister implicitly sneered at Northstar's ambiguous relationship with an older male mentor: "You – of all people – dare to judge my love life."

It would be another twenty years before Northstar, sometimes neglected by writers for years on end, finally found happiness and married his husband in a high-profile affair attended by a who's who of Marvel superheroes. (DOMA is threatening to derail that happiness.)

Howard Cruse, Bob Ross and the other LGBT comic creators behind Gay Comix didn't have to chart such a slow course. They hit the ground running in 1980, the year Gay Comix #1 hit the underground newsstands. Of course, Gay Comix never had nervous publishers or media-driven boycotts to worry about. Nor were they dealing with super-powered heroes for children. Gay Comix was made by adults for adults to explore the waters of a changing and often sexually-charged America that, from today's perspective, looks in many ways like a distant memory.

Finding back issues of Gay Comix is a task for serious collectors, but some issues have been collected in anthologies like Robert Triptow's Gay Comics and individual editions can be found online if you look hard enough and there may even be copies at your local library. But anyway you can find Gay Comix, you should, because they're a unique look at 20th century gay life that deserve as much recognition as other heroic gay comic characters.

(Click on the images above to get a closer look…)