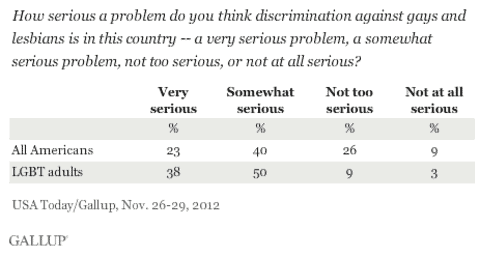 Gallup recently asked Americans to weigh in on discrimination against gays and lesbians and a majority, 63%, describe such bias as a “serious” or “very serious” problem. Even more LGBT Americans, those who directly encounter prejudice in its various forms, agreed: 88%.

Interestingly, the same poll shows that people find their particular communities to be more accepting than the nation as a whole:

Americans overall and LGBT Americans have similar views on how
challenging it is for gay or lesbian adults to live openly in their
community. In this respect, both Americans and LGBT adults are generally
positive, with a majority of each group saying it is “not too
difficult” or “not at all difficult” to live as openly gay or lesbian.
Still, about 40% of each group believes it is difficult to do so where
they live.

The generally more negative views about gay and lesbian discrimination
nationwide versus the more positive views about the difficulty of living
as openly gay or lesbian in one’s local community could reflect
Americans’ tendency to see conditions in the United States as a whole as
worse than those in the area where they live.

Meanwhile, the poll shows that 51% of Americans believe the nation will reach a consensus on marriage equality, while 45% say otherwise. And opinion on that matter is clearly correlated with political affiliation: “Specifically, 65% of Democrats think the country will reach agreement on gay rights issues in the future, while 33% disagree.
In contrast, a majority of Republicans, 61%, believe the U.S. will
continue to be divided on gay rights issues, with 34% expecting a
consensus to emerge.”