A group of scientists from the National Institute for Mathematical and Biological Synthesis say they believe they have the answer to why people are gay, and believe it is an "epigenetic" one linking fathers to lesbian daughters and mothers to gay sons. And they say they can prove whether their theory is right within six months, US News reports: 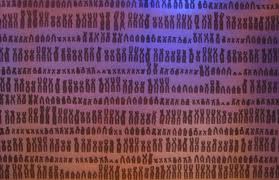 Long thought to have some sort of hereditary link, a group of scientists suggested Tuesday that homosexuality is linked to epi-marks — extra layers of information that control how certain genes are expressed. These epi-marks are usually, but not always, "erased" between generations. In homosexuals, these epi-marks aren't erased — they're passed from father-to-daughter or mother-to-son, explains William Rice, an evolutionary biologist at the University of California Santa Barbara and lead author of the study.

"These epi-marks protect fathers and mothers from excess or underexposure to testosterone — when they carry over to opposite-sex offspring, it can cause the masculinization of females or the feminization of males," Rice says, which can lead to a child becoming gay. Rice notes that these markers are "highly variable" and that only strong epi-marks will result in a homosexual offspring.

Adds Rice: "We've found a story that looks really good. There's more verification needed, but we point out how we can easily do epigenetic profiles genome-wide. We predict where the epi-marks occur, we just need other studies to look at it empirically. This can be tested and proven within six months. It's easy to test. If it's a bad idea, we can throw it away in short order."