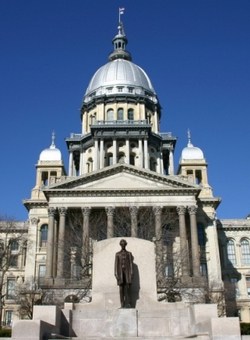 After counting heads and consulting with legislative leaders, the chief sponsors of a bill to permit same-sex couples to get married in the state this morning disclosed they intend to push for a vote in the General Assembly's lame-duck session, which will occur over two weeks just after New Year's.

And, in an indication of how big a campaign the pro side is launching, they've hired the firm founded by top presidential adviser David Axelrod to help them with media, organization and outreach to potential supporters, including corporate officials.

Chief Senate sponsor Sen. Heather Steans said, "We think we can get this done in January, while Rep. Greg Harris, lead advocate of the bill in the state house, concurred, "The timing is right for us to push this… Folks are seeing what's going on around the country."

Lambda Legal celebrated the news. "By bringing the marriage bill to a vote, Rep. Harris and Sen. Steans
the co-sponsors of HB 5170 have brought hope to thousands of same-sex
couples across Illinois," said Camilla Taylor, the group's Marriage Project Director.

"Whether it's through the courts or through the
legislature, Illinois same-sex couples and their children need the
freedom to marry now, and it's encouraging that our elected officials
agree. The time is now."

And Illinois Gov. Pat Quinn, as we know, is on board. "I hope that bill goes forward," he said earlier this week. "It’s the House that probably the key arena at this time, and I think we’ll see how the members look at that issue. They should study it carefully and vote their conscience."