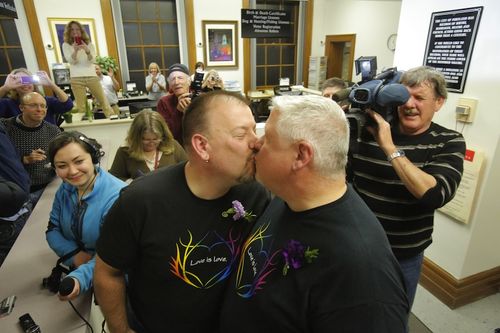 Congratulations to Michael Snell and husband Steven Bridges, the first same-sex couple to marry after marriage equality became legal in Maine after midnight.

The first gay couple to be married in the state of Maine took their
vows in a short ceremony in the Portland city clerk’s office at
approximately 12:25 a.m.

"We finally feel equal and happy to live in Maine," said Steven
Bridges, who married Michael Snell less than a half-hour after same sex
marriages became legal in the state.

The hand-holding grooms sported purple carnation corsages, matching
T-shirts printed with the phrase "love is love," and grins so big they
hardly seemed to fit on their faces.

Snell and Bridges, both of Portland, have been together for nine
years and had a commitment ceremony six years ago, but late Friday
night, they were more than ready to make their love legal. The couple
was the first in line to be married beginning at 12:01 a.m. Saturday in
one of the state’s first legal same-sex marriage ceremonies.

Snell, Bridges and all the other couples are just more proof that 2012 was a watershed year for the equality movement, and provide hope that 2013 will be just as bright.

[Image via Gregory Rec at the Portland Press Herald]