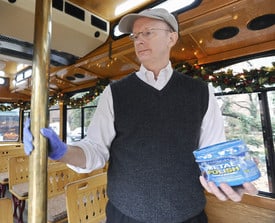 As Maryland plans to celebrate its first same-sex nuptials following November’s big marriage win, trolley company Discover Annapolis tours has announced it’s getting out of the wedding business because it doesn’t want to allow gay couples to marry on their route.

Well, announce is a strong word: rather, as the Baltimore Sun reports, Discover Annapolis owner Matt Grubbs (pictured, polishing his pole) wrote to a potential client, a straight man, Chris Belkot, that his company is Christian and therefore won’t participate in Maryland’s inclusive laws.

“We’re a Christian-owned business, and we are not able to lend support to
gay marriages,” Grubbs wrote. “And as a public accommodation, we cannot discriminate
between gay or straight couples, so we had to stop doing all wedding
transportation.”

Grubbs then urged Belkot write to his representatives to “request they amend the new marriage law to allow an exemption for religious conviction for the layperson in the pews.” Grubbs also described marriage equality as “repressive bigoty.”

He went on, “The law exempts my minister from doing same-sex weddings, and the
Knights of Columbus don’t have to rent out their hall for a gay wedding
reception, but somehow my religious convictions don’t count for
anything.”

Shocked and appalled by Grubbs’ comments, Belkot wrote back, “It is your right to run your business any way you see fit, but let’s be
honest here, you drive a trolley up and down a street. Not exactly
God’s work.”

Grubbs had no other comment other than that his discriminatory decision is costing his business $50,000.