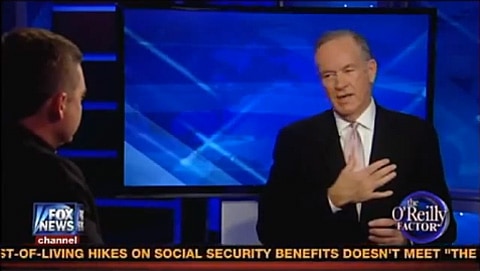 Bill O'Reilly was angry that Father Jonathan Morris went on Fox & Friends and criticized the 'War on Christmas' meme that the right-wing pushes every year, offering O'Reilly the opportunity to mount a robust defense of one of his favorite topics.

O'Reilly also used same-sex marriage as an example of Christian traditions being taken away:

"If you guys don't start stepping up soon and more forcefully, you're going to lose your Christian traditions in this country. Let me give you one more example. Gay marriage. I got nothing against gay marriage. Not my issue. I want homosexual Americans to be happy and to pursue happiness. So I'm not going to be an anti-gay marriage warrior. But if you believe, and the other Christian religions, and there's a lot of em. That gay marriage is wrong and harmful, then you gotta get up there and make just as strong an argument, and you haven't. And that's why public opinion is turning against – in favor of gay marriage. You're losing these wars, father."