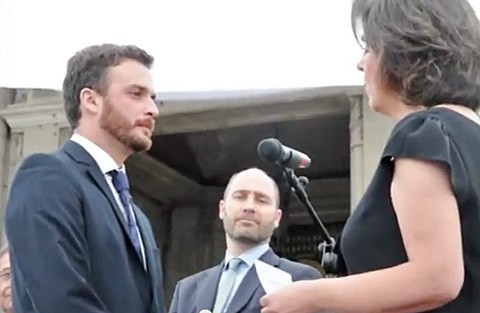 Jaime Parada Hoyl, spokesperson for the Movement for Homosexual Integration and Liberation (MOVILH), won a seat on the municipal council in Providencia, one of the capital Santiago's wealthy and most conservative districts, on October 28. He was sworn in yesterday.

Watch hiw swearing in, AFTER THE JUMP…

Parada described long-time Providencia Mayor Cristián Labbé, whom he defeated, as a "recalcitrant fascist" during the election, the Washington Blade reported in November:

“We did not just present ourselves as gay in the election,” he said when asked about his historic election. “We put forth a platform that had a lot to do with a political agenda, and that is why our campaign had an impact. It had a lot to do with sexual diversity and discrimination in general. It was not something we would have been able to imagine with the setbacks of a few years ago. And with this opportunity we can communicate the contrary.”