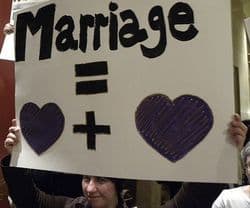 A new survey of voters in Washington, where marriage equality just passed the ballot box and is already in full swing, again shows that age, party affiliation and religious attendance all impact LGBT support in predictable ways.

Younger voters prefer equality, conservatives and those who attend more religious services do not. But the survey, put out by centrist Democratic group Third Way, also shows that the framing of the issue – rights versus loving commitment – impacts support and opposition.

From Frank Bruni’s summation of the report that will released later today.

…Among voters who saw the desire by gays and lesbians to be legally wedded as a bid primarily for the rights and protections that heterosexual couples have, same-sex marriage was a loser. Only 26 percent of them voted for its legalization, while 74 percent voted against.

But among voters who believed that gays and lesbians were chiefly interested in being able to pledge the fullest and most public commitment possible to their partners, same-sex marriage was a huge, huge winner. Eighty-five percent of those voters supported it, while only 15 percent opposed it.

When an initiative in this country is framed or understood largely as an attempt by a given constituency to get more, the opposition to it is frequently bolstered, the resistance strengthened. Even if the constituency is trying to right a wrong or rectify a disadvantage.

“Give me” can be a risky approach. “Let me” is often a better one…

Another recent Third Way survey, released in October, showed that among national polls, support for marriage equality jumped 16 points between 2004 and 2011, and that support was spread across all demographics, so clearly LGBT activists and their allies are saying something right.

Meanwhile, AFTER THE JUMP. Third Way’s charts of what could happen to marriage equality in the Supreme Court.