The Daily Mail reports The Bishop of Shrewsbury is using his Christmas sermon later today to argue "that both Hitler and Stalin challenged Christianity with the notion that what they were doing was 'progress.'" 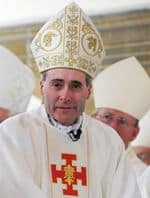 An excerpt from the senior Catholic official's planned remarks, via the Daily Mail:

Past generations have gathered in this cathedral on Christmas night amid many shadows which seemed to obscure the future for them.

We think of the ideologies of the past century, Communism and Nazism, which in living memory threatened to shape and distort the whole future of humanity.

These inhuman ideologies would each challenge in the name of progress the received Christian understanding of the sanctity of human life and the family. Winston Churchill, Britain’s wartime Prime Minister, a man without clear, religious belief, saw in this deadly struggle nothing less than the defence of Christian civilization.

Davies also plans to hammer Prime Minister David Cameron for his pro-equality push. "The Prime Minister has decided without mandate, without any serious consideration, to redefine the identity of marriage itself, the foundation of the family for all generations to come," he will reportedly say.

Ruth Hunt from the LGBT group Stonewall described Davies's forthcoming comments as "offensive," which is an understatement. "Gay people are all too aware of the horrific results of Nazi ideology due to the countless casualties of the Holocaust," she said. "Bishop Davies’s comments are both deeply offensive to gay people and their families." And human decency.