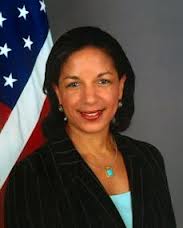 On Human Rights Day, we celebrate a simple but powerful declaration that “all human beings are born free and equal in dignity and rights.” Adopted 64 years ago today, the Universal Declaration of Human Rights stands as a monument to the courage of its founders and to freedoms longed for by every human being. But the fight for these freedoms—from demagogues and from tyrants, from the shackles of slavery and from the censor’s pen—did not end with the historic adoption of the Universal Declaration on December 10, 1948. As Eleanor Roosevelt said, success in the struggle “is a question of actually living and working in our countries for freedom and justice for each human being.”

Today, we pledge to live up to Eleanor Roosevelt’s inspirational example, for in far too many places human freedoms are still denied. As long as a family anywhere is tormented by a state-sanctioned killer; a peaceful agitator is hounded by a violent brigade; an artist is locked away for expressing what she thinks; an LGBT individual is harassed because of whom he or she loves; a community is beleaguered because of how it worships; a person with a disability is marginalized by those who ignore plain injustice; or a girl is threatened for having the audacity to pick up a book; all of our rights have been violated.

The United States is relentless in pursuit of a world that protects these rights. We fight for them at the United Nations, where we have made important strides, because we know that American leadership in the world can bring action against oppressors and hope to the oppressed. Our job is not done and the path ahead is fraught. But may we work together every day for the cause of human rights, so that our efforts can forge a world that respects our differences, protects our dignity, gives our children opportunities to pursue their dreams, and ensures that freedoms we have pledged to protect are universally enjoyed.

Previous Post: « American Apparel to Give Away 10,000 ‘Legalize Gay’ T-Shirts on Streets of Paris
Next Post: NOM’s Brian Brown is ‘Very Happy’ That the Supreme Court Took the Prop 8 Case: VIDEO »