American Apparel is joining the marriage equality battle in France: 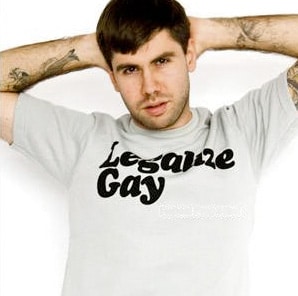 At the request of its French employees who have been eagerly following the country's efforts to legalize gay marriage, American Apparel will be giving away 10,000 Legalize Gay shirts in its stores and on the streets of Paris.

Despite support from French President Francois Hollande, progress towards the full legalization of gay marriage has faced tough opposition from religious and political groups. Recently, conservative organizations have sponsored petitions against gay marriage and proposed various exemptions in an effort to undermine potential bills. Though polls currently show that a majority supports the passing of gay marriage laws, these numbers have declined in light of strenuous campaigning from opposing groups.

Said Dov Charney, founder and CEO of American Apparel: "In America the foundation of our civil rights are written as life, liberty, and the pursuit of happiness – in France it is liberty, equality, fraternity. Our company believes that those creeds by our founding fathers join us in an obligation to fight for freedom and fairness. Both the French and American people have a shared tradition of the pursuit of justice and we are proud to use our company's resources and give our support to this important fight."

The company has given away nearly 100,000 of the iconic shirts since they were created during the Prop 8 campaign.