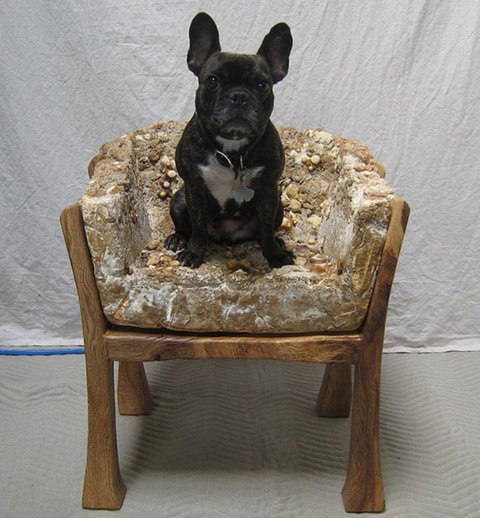 Artist Philip Ross first became interested in the fibrous structures created by mushrooms and other fungii about twenty years ago, when he was working with a chef who grew his own shrooms. After years of practice and perfecting the art of manipulating molds and spores, Ross has created a range of furniture made of fungus.

Right now Ross is working with a fungus called Reishi that creates new forms as it devours the wood upon which it's placed. New Scientist uncovers how it's done:

As [Reishi] digests the wood, it rearranges the fibers and forms a hard substance called chitin, also found in crab shells. The arrangement of the sawdust and the size of its chunks alter the chitinous forms that result.
…
With tools such as the serendipitous kerosene-Vaseline mix, Ross determines where a mushroom blossoms, where fuzz forms, and where the soma toughens: a black plastic bag pressed tight against the soma cuts off gas exchange, prompting the fungus to form a leather-like layer to encase itself.

Ross dismisses the notion that his rot is a dangerous addition to anyone's living room. Once a piece reaches a point to his liking, he kills the fungus within a 67 °C oven and coats it with a biodegradable lacquer. That means the finished furniture is dead and spores to spread it no longer form.

Ross has a number of other really cool pieces of art/design that you can check out, and perhaps even purchase, at his website.