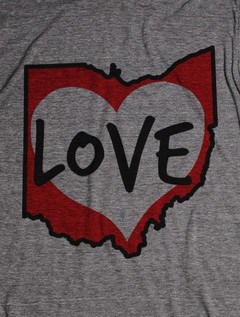 Here’s some evidence that even though Ohio has plenty of work to do in terms of equality and is home to anti-equality House Speaker John Boehner, the Buckeye State is full of awesome people who love their LGBT friends and neighbors…

Joel Diaz, Chief Development Office at AIDS Resource Center Ohio, and his friend Ethan were at a popular pizza truck in Columbus, Ohio, holding hands and huddled together against the cold, when a random man told them to end the “gay shit.” The crowd who overheard the homophobe’s command didn’t fall in line behind him; instead, they ran the man off into the night, making clear that they won’t stand for hate in their community.

I’ll let Diaz writing at The Huffington Post, fill in the rest:

…All of the sudden the guy in front of us turns around and tells us to cut our “gay shit” out.

I was a bit startled by his words but I didn’t expect what happened next. Almost every single person in that line made it known to him it was not OK for him to speak to us like that. By happenstance my friend John, who is also gay, was standing in front of him and as he continued his rant about being disgusted by us we both let him know that this was our city too and that we were not about to stand down to his bigoted ideas, especially not in one of the gayest neighborhoods in town. As he continued it was actually the straight people in line who spoke up that were so awesome.

I didn’t expect to see allies so willing to chime in and let this guy know that his hate speech wouldn’t be tolerated. The best part though was as he grew more irate and vocal the guys who work the truck stopped what they were doing and leaned towards the window and told him they would not serve him because he was spewing hate. They said they support everyone in our community and that he should get out of line because they would not be serving him. He begrudgingly got out of line and walked away escorted by a friend who had been hanging back.

As I walked away with my pizza all I could think about was “THAT’S IT!” Every person who spoke up to defend us including the pizza guys representing their business was doing their part to make hate a thing of the past.

What an incredible show of support. Awesome work, pizza-eating denizens of Columbus, Ohio, and thanks to Diaz for sharing his story.

[Image from Mister Ohio at Skreened.]