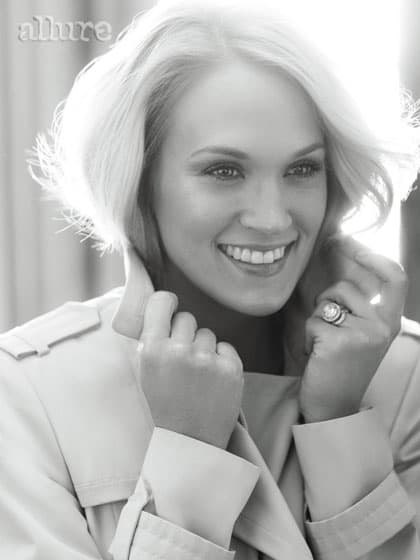 Carrie Underwood covers this month's Allure magazine. They asked her about statements she made back in June which caused a conservative uproar:

In June, Underwood came out in favor of gay marriage. "As a married person myself, I don't know what it's like to be told I can't marry somebody I love," she told a British newspaper.

She elaborates: "I'm in favor of acceptance," she says flatly. "And I am a Christian person, and I do love the Lord, and I feel no matter who you are, what you believe, how you live your life, it's not my place to judge. I don't have that power. I don't want that power. It's my place to love and to show God's love to other people, even if they don't live a life like I live. So that's where I'm coming from."

Underwood was hammered by conservative fans for her remarks, and was blasted by World Net Daily's founder Joseph Farah, who said:

"God did warn us not to profane His holy name. I don’t think that just means misusing His name as a curse word. I think we do that when we represent ourselves as followers of God but betray His Word. That’s blasphemy – and there’s just too much of it coming from people claiming to be Christians."