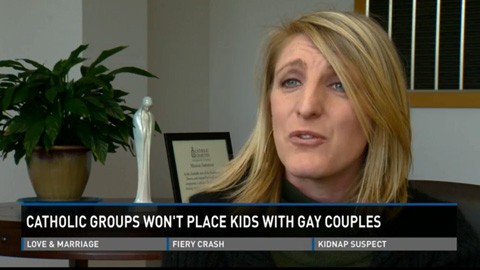 As in many other cities and states that have approved marriage equality, Colorado's (where civil unions may soon be a reality) Catholic Charities are objecting to having to serve gay couples.

"Our desire is to provide them with a safe and stable environment."

"The Catholic church understands the best foundation for a child's life is to be in the home of a father and a mother that is going to raise them in a family environment that is a strong, healthy marriage," said Monsignor Tom Fryar, who serves as pastor for the Denver Cathedral.

By dictionary definition, the church does discriminate when it comes to adoptions– not just against gays but also against single people.

They only let married couples adopt. Even if the laws change, the church won't.

"We cannot," Fryar said. "It goes against our faith."