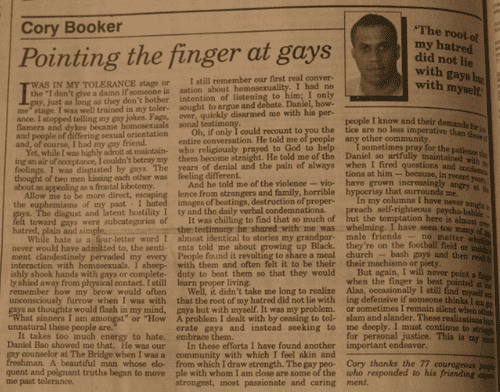 Time and again polls show that the single biggest factor in someone changing their minds about marriage equality or general LGBT rights is meeting an LGBT person. It’s that simple. They meet a gay person, see that we don’t have horns, and move past their archaic attitudes. Newark Mayor and likely U.S. Senate candidate Cory Booker is one of those people.

On April 8, 1992, he wrote an opinion piece for his university newspaper, The Stanford Daily, about how meeting a gay person changed his mind on the matter. That paper republished the piece today. Here is an excerpt:

…While I was highly adroit at maintaining an air of acceptance [of gays], I couldn’t betray my feelings. I was disgusted by gays. The thought of two men kissing each other was about as appealing as a frontal lobotomy.

Allow me to be more direct, escaping the euphemisms of my past – I hated gays. The disgust and latent hostility I felt toward gays were subcategories of hatred, plain and simple.

While hate is a four-letter word I never would have admitted to, the sentiment clandestinely pervaded my every interaction with homosexuals. I sheepishly shook hands with gays or completely shied away from physical contact. I still remember how my brow would often unconsciously furrow when I was with gays as thoughts would flash in my mind, “What sinners I am amongst” or “How unnatural these people are.”

It takes too much energy to hate. Daniel Bao showed me that. He was our gay counselor at The Bridge when I was a freshman. A beautiful man whose eloquent and poignant truths began to move me past tolerance.

I still remember our first real conversation about homosexuality. I had no intention of listening to him; I only sought to argue and debate. Daniel, however, quickly disarmed me with his personal testimony.

Booker is now one of the most outspoken gay allies in public office.