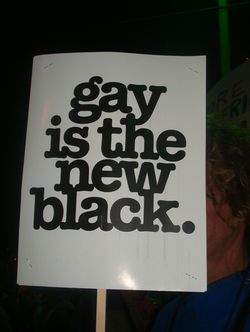 In an opinion piece at the New York Daily News today, John McWhorter, author of the provocative book Losing The Race: Self-Sabotage in Black America, argues that though African-Americans’ opinions on gay rights are basically on par with the rest of the nation, they have a greater obligation to stand up for equality.

From that piece, called “Gay Really Is The New Black:”

The percentage of blacks who favor gay marriage is about the same now as the percentage of whites, according to a Pew poll taken during the last election season. “One of the striking results in the 2012 exit polls was the support for legalizing gay marriage among black voters,” that poll noted.

However, rising support isn’t enough — we must keep going. When Michael Richards spouted the N-word on stage, he was shamed by the nation for weeks. It won’t do for Tracy Morgan to get a mere slap on the hand for crowing that he would stab his son if he turned out to be were gay.

As a consequence of its painful heritage, black America has a special responsibility: to be further ahead of the curve than whites on accepting gay people as full citizens.

The Bible cannot be used as an excuse to hold us back. We should remember that racists once also appealed to the Bible to justify segregation, slavery and all manners of hatred. Let’s be progressive for real this time around.

McWhorter goes on to say the real test will come when a closeted black celebrity comes out, someone really A-list. “Wanda Sykes, Don Lemon and rapper Frank Ocean have been noble pioneers — but then again, none are megastars or play romantic parts,” he writes.

Previous Post: « Ben Rimalower Is Working Through His ‘Patti Issues’ At The Duplex: INTERVIEW
Next Post: GOProud Will Cruise Through March For Life Tomorrow »