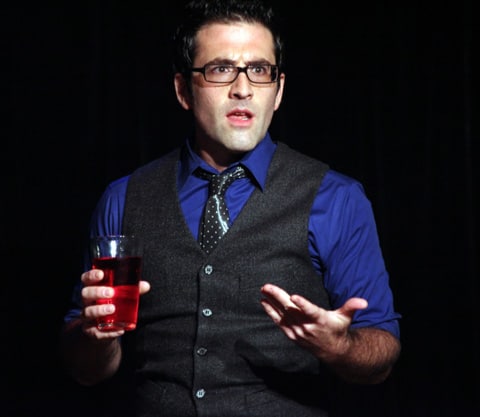 Delivered as a single monologue by Rimalower in the intimatecabaret theatre upstairs at the Duplex, PattiIssues is more than a fanatic’s ode to his legendary idol. At its core thiscoming-of-age story is about Rimalower’s troubled relationship with his gayfather, who abandoned his family for a series of flames that burned up quickly,consuming his dad in the process. 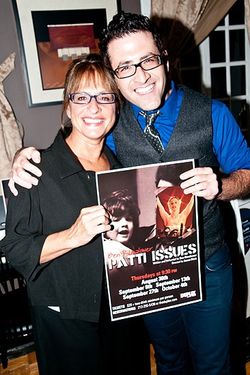 Like so many, Rimalower turned to the arts—and musicaltheatre in particular—as a source of solace from the emotional growing pains ofan unconventional adolescence. His kinship with LuPone began as a teenageobsession over her performance as Eva Perón in the original Broadway castrecording of Evita. A boy and hisheadphones.

Unlike many, Rimalower met his idol. Not only that, but his gigas an assistant director to Lonny Price on the 2000 NY Philharmonic concertperformance Sweeney Todd entailed aprivate line-running session with Ms. LuPone—during which she sang the entirevocal part of Mrs. Lovett into his euphoric, beaming face.

He thereafter developed a personal and professionalrelationship with the leading lady that hasn’t always been wine and roses. As Rimalowerrecounts in his sixty minute show, it’s through a unique connection to his idolthat he learns a thing or two about life, family, and coming out on top. Like adiva, of course.

I spoke to Ben about his experience performing the show, hisplans for the future, and of course Patti LuPone.

Ben Rimalower: I hope that they connect to it personally ina way that they feel that they've shared my journey, and it transported thememotionally. As far as a message, I know what the show is about for me, interms of what I’m trying to learn from it myself.

Patti was for me, and still is in a lot of ways, this sortof superhero [in whom] I found inspiration and empowerment. I vicariouslytriumphed through her and vicariously shared her rivalries—even the rivalries Iimagined she would have, those were mine too. Then I got to know her, and hadto interact with her on this different level—as an actual human being.

I think maybe the universal aspect [of the show] issomething we have to experience growing up — to see our parents as real people,and not as these gods who are infallible that are always going to take care ofus. My father certainly let me down atthat. In a very different way, I could see this from my relationship withPatti, because after all she was not my fairy godmother, she was a person. 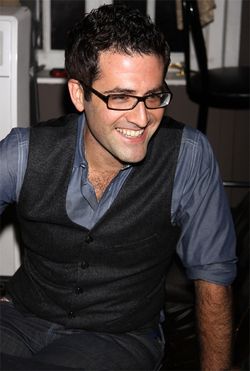 When I was doing a [cabaret show based on her recordings] that,at a certain point, she didn’t think was conducive to her career, she cut itoff. She didn’t say, 'Well, I love Ben, he’s so sweet let’s just let them do it.'She said, 'No, that’s it,' and she didn’t take care of me. But instead offeeling betrayed by her, I realized at the end of the day, it was not Patti'sresponsibility to take care of me. So I didn’t have to forgive her for thatbecause I was responsible for myself. I still produced an album with Patti, andwound up having a successful relationship with her after that happened.

Then when I saw my father [for the first time in many years]at Gypsy, it was actually anempowering moment for me. I saw him like an adult. For better or worse, [I had]grown up without his help, and was just able to realize, it is what it is.

For me that’s why the stories were intertwined when I wastrying to write about my own experience. So, maybe there is something for otherpeople to take away from that.

NK: From your experience, why do you think so many young LGBTpeople turn to theatre, and musical theatre in particular in that process ofgrowing up?

BR: There are so many different things that come together inmusical theatre. Definitely my attraction to it most of all was that musicaltheatre is where you’ll find 'the diva.' You can see Meryl Streep or GlennClose in a great film and there's a diva aspect to them giving this virtuosoperformance, but they're not asked to step forward and sing and go to thatheightened level, which for me has always been so transporting. That's alwaysbeen what dazzled me. I felt vicariously empowered by that.

Also musical theatre combines singing, dancing, music, set, costumes,[etc.] and brings together so many creative forces, and I think LGBT peopletend to be creative. [Many of us] grew up around [musicals] and they were whatwe had available as avenues to perform or express ourselves creatively inschool. [We] weren’t doing experimental Off-Broadway plays or Philip Glassoperas. Who knows, maybe my life would have been different!

NK: Well, Meryl does sing in Mamma Mia!, I have to point out.

BR: Thank you for that, I was just waiting for you to saythat! No, obviously and I think she sings in Death Becomes Her and PostcardsFrom The Edge and she's done musicals on Broadway, but that hasn't been thebulk of what she's associated with.

NK: You began your career in professional theatre on thedirecting side, starting with your assistant gig to Lonny Price. How has yourexperience been transitioning into the role of performer?

BR: It's been great. I came into this experience because Iwanted to be writing, and what felt natural for me to write also happened to besomething I felt like I should perform myself. It wasn’t originally myintention.

I've always had a very extroverted and performativepersonality. I had chosen not to focus on performing, but having stumbled backinto it, I've found that I really love it. It's given me a lot of sympathy forall the actors I've worked with, and actors in general. It's really theperformer's ass out there on stage, and no matter that the behind-the-scenestalent thinks or knows, the performer is the one who's out there dealing withthe audience in the moment night after night. 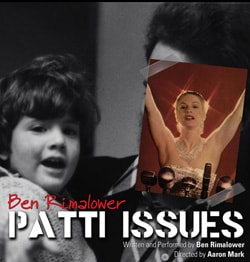 NK: Can you talk about the future life of the show, andwhat's next for you?

BR: I'd love to see PattiIssues go as far and wide as possible. It still really feels very fresh tome; I really enjoy performing it for new people, and it seems like a diversityof people that are responding to it. I'd like to keep performing the show aslong as possible in New York and I'm very happy doing it at the Duplex. I'mdoing it in a few cities in California in the coming months. I'm working rightnow on booking it in other venues around the country, and even some overseaswithin the next year.

I'd also like to adapt it into a memoir and publish it, soI'm working on getting that ball rolling, which will involve a lot ofrepackaging and reconceiving it. I also have another show in mind, another soloshow like this that I want to do [for which] I just have some rough material. Hopefullywithin the next year I'll be ready to open the new show too.

NK: Has Patti been to see the show?

BR: Patti has! Patti came to the second performance back inSeptember.

NK: How was that?

BR: Well…it was terrifying. [laughs] It was very scary.Originally I was booked only for five performances, so the onus was on my totry to get everyone that I could get in to see it. Patti is such an importantforce in my life, especially creatively, that if I were doing anything at all,it would be my dream for her to see my work. Even if this had nothing to dowith her, I would have really wanted her to see it.

I was also really nervous, what if this was not somethingfor her? What if she didn’t like it? What if she thought it was bad? What ifshe was offended? So I had to kind of put that aside.

The audience the night Patti came was insane. I mean the tension in the room, people were watching her. She has such a greatlaugh, it really is like the wicked witch's cackle, so right away it was clearthat Patti has a sense of humor about herself, and she buys into the idea ofherself as this sort of straight-shooting, tough-as-nails, old school, brassyBroadway dame. So that set everybody at ease for a lot of the show because shewas laughing the loudest at all this schtick of me representing her a certainway.

Then it got to the point about her threatening to sue me,and it was really strange in that room. But Patti loved it. The thing is, Pattidoesn’t feel I represent her like a bitch because she stands behind theintegrity of what she believes. Patti felt that [the cabaret show at Joe's Pub]was not good for her, and that she had the right to have it stopped, and that Iwas lucky she called first rather than of suing me. So she wasn’t offended bythat at all, and I think she appreciated that I portrayed it truthfully.