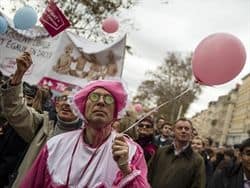 A new poll out of France shows a small improvement in the number of voters who support marriage equality.

The number of people who support the legalisation of same-sex marriage in France has risen despite major protests against the government’s planned reforms earlier this month, a new poll by Ifop for news website Atlantico.fr showed.

The proportion of those surveyed supporting the change in the law rose to 63 percent from 60 percent in early January and December.

Support for adoption rights for gay couples also rose by 3 percentage points, although the country remains divided on the issue, with 49 percent in favour, according to the international marketing firm.

While good news on the surface, never forget that polls should be taken with a grain of salt.