Campus Pride executive director Shane Windmeyer writes about his months-long dialogue with Chick-fil-A President and COO Dan Cathy which led to an invitation to hang out with Cathy at the Chick-fil-A bowl, and the suspension of Campus Pride's boycott and protest of the chicken chain. 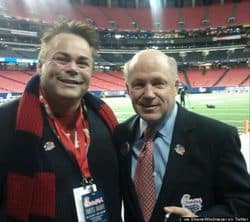 Windmeyer says Cathy called him out of the blue and began an extensive dialogue of trust-filled exchanges:

Chick-fil-A also provided access to internal documents related to the funding of anti-LGBT groups and asked questions about our concerns related to this funding. An internal document, titled "Who We Are," expressed Chick-fil-A's values, which included their commitment "to treat every person with honor, dignity and respect," including LGBT people. Dan and his family members had personally drafted, refined and approved the document.

Through all this, Dan and I shared respectful, enduring communication and built trust. His demeanor has always been one of kindness and openness. Even when I continued to directly question his public actions and the funding decisions, Dan embraced the opportunity to have dialogue and hear my perspective. He and I were committed to a better understanding of one another. Our mutual hope was to find common ground if possible, and to build respect no matter what. We learned about each other as people with opposing views, not as opposing people.

Windmeyer says Chick-fil-A has kept its promises to stop funding anti-LGBT groups and explains that's why they suspended their boycott back in September:

This past week Chick-fil-A shared with me the 2011 IRS Form 990, filed in November for the WinShape Foundation, along with 2012 financials. The IRS has not released the 990 to the public yet, but the financials affirm Chick-fil-A's values a year prior to the controversy this past July. The nearly $6 million in outside grant funding focuses on youth, education, marriage enrichment and local communities. The funding reflects Chick-fil-A's promised commitment not to engage in "political or social debates," and the most divisive, anti-LGBT groups are no longer listed.

Even as Campus Pride and so many in the community protested Chick-fil-A and its funding of groups like Family Research Council, Eagle Forum and Exodus International, the funding of these groups had already stopped. Dan Cathy and Chick-fil-A could have noted this publicly earlier. Instead, they chose to be patient, to engage in private dialogue, to reach understanding,and to share proof with me when it was official. There was no "caving"; there were no "concessions." There was, in my view, conscience.

What do you think? Should LGBT folks stop their protests against Chick-fil-A?