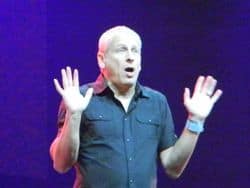 Rev. Louie Giglio has released a statement on why he stepped down from his position as the official inauguration pastor. According to him, a shadowy “agenda” threatened to distract from and “dwarf” his appearance.

Due to a message of mine that has surfaced from 15-20 years ago, it is likely that my participation, and the prayer I would offer, will be dwarfed by those seeking to make their agenda the focal point of the inauguration.

Clearly, speaking on this issue has not been in the range of my priorities in the past fifteen years. Instead, my aim has been to call people to ultimate significance as we make much of Jesus Christ.

The inauguration committee, under fire for selection Giglio in the first place, has also released a statement, this one insisting they were unaware of Giglio’s past anti-gay comments:

We were not aware of Pastor Giglio’s past comments at the time of his selection and they don’t reflect our desire to celebrate the strength and diversity of our country at this Inaugural. Pastor Giglio was asked to deliver the benediction in large part for his leadership in combating human trafficking around the world. As we now work to select someone to deliver the benediction, we will ensure their beliefs reflect this administration’s vision of inclusion and acceptance for all Americans.