Apparently, attracting an online hook-up with a sexy profile photo taken with the asphalt slabs of Berlin's Holocaust Memorial as a backdrop is a thing, and now Grindr is distancing itself from the phenomenon after its founder previously appeared to endorse it, Salon reports: 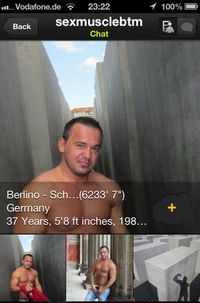 In the site’s early going, the proprietors bragged that the CEO of Grindr, Joel Simkhai, seemingly endorsed Totem and Taboo. “As a Jew and an Israeli, I’m deeply moved by how users are coming together as a community on Grindr to share and inspire others take part in memory of the Holocaust,” Simkhai told an Israeli newswire. But on Monday, Grindr press representatives told Salon: “Back in 2011, when Grindr was first made aware that a few users were posting an image of Berlin’s Holocaust Memorial in their profile, we observed that the user initiative was a novel form of expression.

“What started as users expressing themselves on a topic not often discussed in social networking profiles, has now become disrespectful.  We strongly encourage our users to engage in a respectful manner and honor the memory of those who perished in others ways outside of the app.”

The founders of Totem and Taboo, the site which has been aggregating the Grindr photos, say they are "proliferating": “We don’t really know what makes people pose there, and we’re not dealing with questions of intentionality in our project. We’re focusing on making the phenomenon visible.”

Previous Post: « Former Rep. Gabby Giffords Tells Senate Panel ‘We Must Do Something’ About Gun Violence: VIDEO
Next Post: Life by the Numbers: VIDEO »