Rush Limbaugh spent a large portion of his show on Monday suggesting there is a link between homosexuality and pedophilia in a discussion about an article in the UK Guardian newspaper. 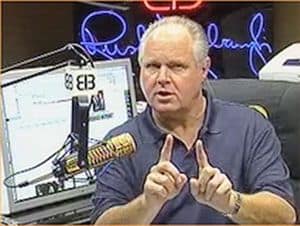 There is an effort underway to normalize pedophilia. Yep. And it has two aspects to it. One is that sex with children doesn't hurt them. Kids like it, and so do adults, and there's nothing wrong with it. It is something… I want to take you back. I want you to remember the first time, wherever you were, that you heard about gay marriage, and I want you to try to recall your reaction — your first gut reaction — when you heard that some activists or somebody was trying to promote the notion of gay marriage. What was your initial reaction?

"Aw, come on. It'll never happen. That's silly. What are you talking about?"

There is a movement on to normalize pedophilia, and I guarantee you your reaction to that is probably much the same as your reaction when you first heard about gay marriage. What has happened to gay marriage? It's become normal — and in fact, with certain people in certain demographics it's the most important issue in terms of who they vote for. So don't pooh-pooh. There's a movement to normalize pedophilia. Don't pooh-pooh it. The people behind it are serious, and you know the left as well as I do. They glom onto something and they don't let go.

Listen to Limbaugh's segment, AFTER THE JUMP…