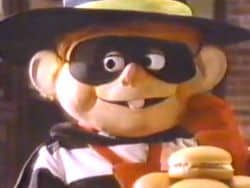 Like so many other legislatures in the world, New Zealand's Parliament is currently considering a bill that would legalize same-sex marriage. And, as happens the world over, this legislative development has brought out some real anti-gay loons, like Garth McVicar.

McVicar, a lobbyist for the crime victims' rights group Sensible Sentencing, filed a brief with parliament in which he claims marriage equality will lead not to loving relationships, but to rampant crime.

"The marriage amendment bill will not benefit society at all and will
ultimately have detremetal (sic) effect on crime at all levels," he wrote.

Kevin Hague, a Green Party MP who sits on the select committee debating whether or not to put the marriage bill to a full vote, laughed at McVicar's dubious rationale.

"Although [McVicar's complaint] echoes a number of submissions that say marriage has
been the same way for a long time and that if you tamper with it there
will be lots of unforeseen circumstances," he said. "I suspect that underlying this submission is a prejudice against gay
people. If you break the argument down, it is manifestly nonsensical."

Like so many of the other right wing arguments…