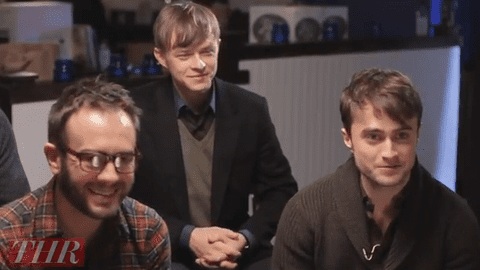 Kill Your Darlings, the indie flick in which Daniel Radcliffe plays a young Allen Ginsberg exploring his sexuality, premiered at Sundance last night. And, yes, of much of the post-show chatter dealt with Radcliffe’s on-screen gay romances.

Speaking with E! after the show, Radcliffe said that while on-set gay sex was new for him, director John Krokidas gave him a blow-by-blow about how it all goes down.

“We shot that whole scene in maybe an hour and a half so it was incredibly fast-paced. I didn’t really have time to stop to think and worry about it.” Radcliffe said about breaking into unfamiliar sexual territory. “John was very helpful in furnishing me with a lot of graphic detail of what I would be experiencing at the various stages.”

Though Kill Your Darlings, which also stars Jack Huston as Jack Kerouac, Ben Foster as William Burroughs and Michael C. Hall as David Kammerer, a man whose murder provides the movie’s dramatic pivot, has yet to find a distributor, the amount of attention and generally positive reviews – The Hollywood reporter wrote, in part, “there’s a limber, freewheeling aspect to the storytelling that echoes the rule-breaking literary form of the Beat writers” – and Radcliffe’s star power should be enough to guarantee at least a small showing around the country.

AFTER THE JUMP, Radcliffe, Krokidas and the rest of the film’s core cast talk with THR about making the film and what the gay men they portray mean to American culture.