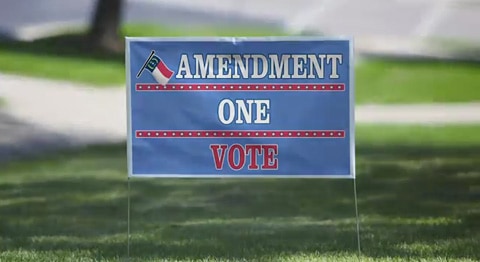 An upcoming documentary (now in post-production) looks at North Carolina's Amendment One.

I dreamed of one day making a documentary that approached the issue of gay rights from a different perspective: one of compassion, empathy, and relating as human beings.

Then, in the fall of 2011, when I heard about the proposed constitutional amendment in North Carolina, a place that is very politically divided and often considered a swing state,  I knew I had my film. I launched a Kickstarter campaign to fund the project, and it was so heartening to find out how many other people, friends and strangers alike, wanted to see this film get made and see these conversations happen. Soon I found myself in the breathtaking mountains of North Carolina, reaching out to as many different people as I could, trying to get to know them as people and  find out where they’re coming from.

The original title of the film was Hear Our Stories, but after spending months talking people from all walks of life, who on the surface appear as though they could not be more different from one another, I realized something. Something that I was hoping to find all along: People are people. And we are all one.