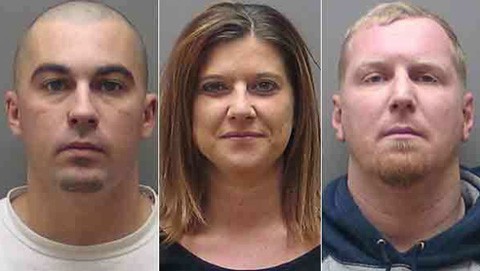 Three people have been charged with aggravated battery and mob action as a hate crime in the Chicago suburb of St. Charles after Susan Patton, the woman pictured above threw a drink in another woman's face at a bar and the altercation continued after the woman targeted with the drink left with her two friends, the Chicago Tribune reports:

As the group of three walked across a parking lot, a grey Mazda pulled up to them and stopped, witnesses reported. Patton got out of the car and again confronted the woman, police said. When the woman's two male friends stepped in front of her, Patton struck them, police said.

Police said a fourth person was also present during the incident and could face charges as the investigation continues.

Arrested were Patton, Stephan Bolt, and Christopher Miner, who remains in custody. Patton and Bolt are free on $3,000 bond.