Apple CEO Tim Cook will sit next to Michelle Obama at tonight's State of the Union address, Mashable reports: 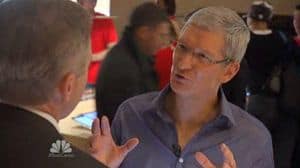 According to The Mercury News, Cook will be seated next to First Lady Michelle Obama in the First Lady's Box. Cook will be joined by Bobak Ferdowsi, a.k.a. NASA's "Mohawk Guy," a member of the Mars Curiosity rover team at NASA and Caltech's Jet Propulsion Laboratory.

The First Lady's guests last year included Laurene Powell Jobs, Apple co-founder Steve Jobs's widow; and Instagram Co-Founder Mike Krieger. In addition, President Obama mentioned Steve Jobs during last year's address: "You see, an economy built to last is one where we encourage the talent and ingenuity of every person in this country. That means women should earn equal pay for equal work. It means we should support everyone who's willing to work; and every risk-taker and entrepreneur who aspires to become the next Steve Jobs."

As I reported last night, joining FLOTUS as well will be Tracey Hepner, the wife of Army Brig. Gen. Tammy Smith, the first openly gay general in the military. So, if previous reports are to be believed, with the addition of Cook, there will be at least two LGBT folks in the First Lady's Box.