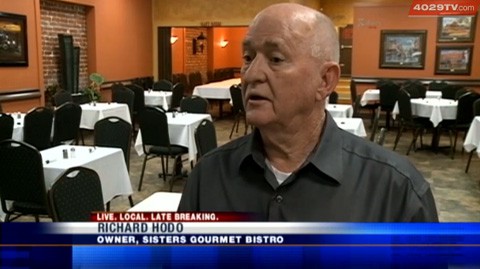 Richard Hodo, the owner of Sisters Gourmet Bistro in Van Buren, canceled a planned fundraiser by River Valley Equality Center, a local LGBT rights group, after he found out who they were, ABC4029 reports:

The organization said they raise awareness for the gay and lesbian community in the River Valley.

"What I told the lady on the on the phone, look I said if the KKK came here and wanted to hold a fundraiser rally and all that, I wouldn't allow that either," said Hodo.

Check out the video interview here.

Previous Post: « James Dale, Plaintiff in 2000 Supreme Court Case, Calls on Scouts to Drop the Gay Ban
Next Post: Lawrence O’Donnell on the UK’s Marriage Equality Vote and the Love That Dare Not Speak Its Name: VIDEO »