More than 75 current and former GOP elected officials including former Reagan and Bush cabinet members, former governors, and key GOP consultants and strategists have signed on to an amicus brief to be filed on Thursday urging the Supreme Court to strike down Proposition 8.

See a summary and excerpts from the brief obtained by Towleroad, below…. 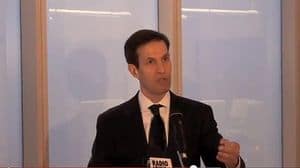 Many of those who signed it have never before made public their support of marriage equality.

UPDATE: Here's the full list (so far) of signatories.

The brief argues that "there is no legitimate, fact-based justification for different legal treatment of committed relationships between same-sex couples," arguing that marriage equality promotes conservative values:

Amici start from the premise—recognized by this Court on at least fourteen occasions—that marriage is both a fundamental right protected by our Constitution and a venerable institution that confers countless benefits, both to those who marry and to society at large.  …  It is precisely because marriage is so important in producing and protecting strong and stable family structures that amici do not agree that the government can rationally promote the goal of strengthening families by denying civil marriage to same-sex couples.

It also argues that there is no credible social science behind the arguments pushed by Prop 8's proponents:

Deinstitutionalization.  No credible evidence supports the deinstitutionalization theory.   …  Petitioners fail to explain how extending civil marriage to same-sex couples will dilute or undermine the benefits of that institution for opposite-sex couples … or for society at large.  It will instead do the opposite.  Extending civil marriage to same-sex couples is a clear endorsement of the multiple benefits of marriage—stability, lifetime commitment, financial support during crisis and old age, etc.—and a reaffirmation of the social value of this institution.

Child Welfare.  If there were persuasive evidence that same-sex marriage was detrimental to children, amici would give that evidence great weight.  But there is not.  Social scientists have resoundingly rejected the claim that children fare better when raised by opposite-sex parents than they would with same-sex parents.

And although the law is consonant with firmly held beliefs, it does not sustain its Constitutionality:

Although
amici firmly believe that society should proceed cautiously before
adopting significant changes to beneficial institutions, we do not
believe that society must remain indifferent to facts. This Court has
not hesitated to reconsider a law’s outmoded justifications and, where
appropriate, to deem them insufficient to survive an equal protection
challenge.  The bases on which the proponents of laws like Proposition 8
rely are the products of similar thinking that can no longer pass
muster when the evidence as it now stands is viewed rationally, not
through the lens of belief though sincerely held.

Finally, the brief encourages court to protect the fundamental right to marry by offering it to same-sex couples:

Choosing to marry is also a paradigmatic exercise of human liberty.  Marriage is thus central to government’s goal of promoting the liberty of individuals and a free society.  For those who choose to marry, legal recognition of that marriage serves as a bulwark against unwarranted government intervention into deeply personal concerns such as the way in which children will be raised and in medical decisions.

Amici recognize that a signal and admirable characteristic of our judiciary is the exercise of restraint. Nonetheless, this Court’s “deference in matters of policy cannot … become abdication of matters of law.” The right to marry indisputably falls within the narrow band of specially protected liberties that this Court ensures are protected from unwarranted curtailment. Proposition 8 ran afoul of our constitutional order by submitting to popular referendum a fundamental right that there is no legitimate, fact-based reason to deny to same-sex couples.  This case accordingly presents one of the rare but inescapable instances in which this Court must intervene to redress overreaching by the electorate.

Said Mehlman to the NYT: "“We are trying to say to the court that we are judicial and political conservatives, and it is consistent with our values and philosophy for you to overturn Proposition 8."