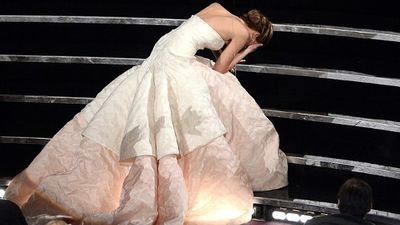 The 85th Academy Awards were held last night and Argo walked away as the big winner, taking home three Oscars including Best Picture which was handed out by the First Lady. Lead acting honors went to Daniel Day-Lewis and Jennifer Lawrence, who manages somehow to even make falling look adorable.

The Onion put its foot in its mouth last night when it tweeted about young nominee Quevenzhane Wallis and used some rather inappropriate language. It seems that Manti Te'o's catfish situation may harm his potential NFL career, as scouts at the Combine are apparently wondering if he is gay but are too afraid to ask. I'm sure everyone can sympathize with the pain and agony of missing one's flight, but this certainly is not the way to handle it.

Chris Hayes of MSNBC was invited to speak at CPAC but has decided that he will not attend because of the group's lack of support for gay rights. NOM has announced that they will plunk down a whole ton of cash to fight any lawmakers who try and support gay marriage in Minnesota. Uggh. Just give up already! Even Mitt Romney's lead strategist says that his disdain for gay rights hurt him. Also the UK's top Catholic priest will step down amid rumors that he is gay. 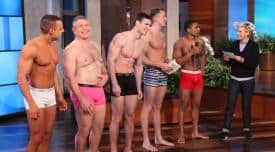 After much deliberation Ellen has finally decided on her first male underwear model. There was hardly a wrong choice to make. And new tracks from both Little Boots and Frank Ocean.

Students from Santa Monica High School prove that hate is no match for love as they out-protest the Westboro Baptist wingnuts.