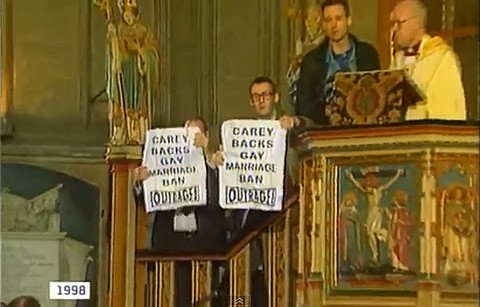 An awesome clip from Channel 4 on the heels of yesterday's historic marriage equality vote in Parliament which covers the changing attitude towards gay people across the pond, in politics and pop culture.

In related news, some legal inequalities will remain under marriage equality legislation, the Guardian reports:

Those who draft the parliamentary bills have been unable to define what constitutes consummation of a same-sex union. Consequently there is no provision for divorce on the grounds of non-consummation of a gay marriage.

That problem also means that same-sex couples who wish to divorce will not be able to cite adultery with someone of the same sex – the civil servants similarly struggled to find a definition of adultery between two men or two women.

Adultery will, nonetheless, be a permitted grounds for divorce if it follows sexual intercourse between one of the couple and someone of the opposite sex. That, at least, is consistent with existing marriage laws: if a man decides he is gay and leaves his wife for a man, she can divorce him for unreasonable behaviour but not adultery, which is defined as sexual intercourse.

Previous Post: « Nate Ruess Joins P!nk and Her Husband Carey Hart for Soaring ‘Just Give Me a Reason’ Duet: VIDEO
Next Post: David Beckham is Caught in His Wet Underwear in New Short Film from Guy Ritchie: VIDEO »