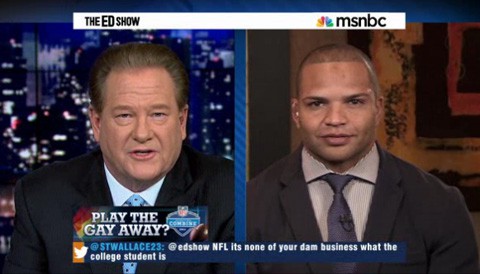 Baltimore Raven linebaker Brendon Ayanbadejo appeared on The Ed Show last night to comment on recent reports from players (like Nick Kasa, below) that prospective NFL recruits are being asked about their sexual orientation. 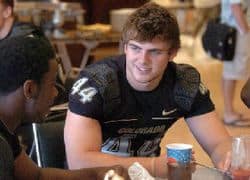 Ayanbadejo suggested that because of engrained homophobia within the NFL, players unfortunately need to say that they're heterosexual or risk their chances in the draft.

"Teams are really fickle, there’s all kinds of things they want to know. A lot of teams really want to talk to you, get a feel for your personality, see what you’re like. If you give the wrong answers, that could be the difference between going to that team in the first round and slipping to another in the draft…Selfishly, I think players need to say that they’re straight right now. You need to get drafted as high as you can get drafted, get the money while you can … The way things are going right now with the bigotry that still exists and discrimination that still exists within the locker room and sports arena in general, I think you need to say, ‘Hey, I’m straight, I love women’, and keep things so-called normal. Maybe later, once you’ve established yourself and when we break down some of these walls in the NFL, players will be more comfortable to be who they are."

Previous Post: « The Vatican is Having a Kiki to Choose the Next Pope: VIDEO
Next Post: Rick Santorum: I Like Ken Mehlman, But Gay Marriage ‘Not in the Best Interest of the Country’: VIDEO »