Activist Zinnia Jones, via one of her readers, revealed a Grindr profile yesterday belonging to someone who appeared to be Matt Moore, an "ex-gay" blogger for the Christian Post, who has written much about his departure from the "gay lifestyle". 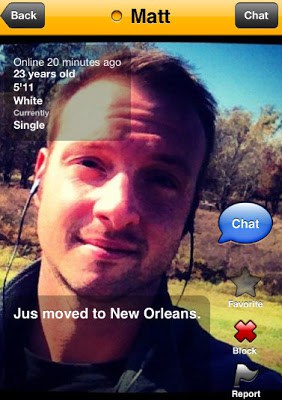 God commands me to repent of my sin not because He’s an evil dictator, but because He’s a loving Father who knows that my sin will destroy me in multiple ways. Mentally, emotionally, physically, and ultimately eternally. If you don’t think homosexuality hurts anybody, just check out the statistics. Check out the number of murders among the gay community. Check out the addiction rate among homosexuals. Check out the average lifespan of a male homosexual. Seriously, just google it. You can see for yourself. …

I can, in truth, firmly say that the longer I keep turning away from my homosexual desires, the less in strength they become. My homosexual feelings have definitely diminished since the night God started drawing me to Himself in September of 2010. Are they completely gone? No, they are not. Will they ever be completely gone? I do not know. …

The main thing that I struggle with the most still is pornography, but even that is changing. I don’t get the same satisfaction that I used to from it. My stomach actually turns at the site of homosexual “relations.” But I also know that if I continue to watch it and harden my heart toward the Holy Spirit’s conviction, I will start to see things again through the eyes of my sinful flesh rather than through the eyes of the Spirit.

Zinnia has a few more examples on her blog. Anyway, after exposing Moore, he wrote her:

The grindr profile was really mine. I’ve been on it on and off for the last couple of weeks.

Like I told the guy who sent you the picture, I am wrong in having been on grindr. I haven’t changed my views on homosexuality, the bible, etc.

Creating a grindr profile and talking to guys on it was major disobedience on my part….disobedience to Christ.

The pastor of my church and the church body I am a part of were informed about me being on grindr (I told them) before all of this came out, publicly.

As we all know, Moore is not only deluding himself, but his writings are dangerous to others who may be reading them with questioning feelings. Hopefully, he'll see the light at some point and realize there's no such thing as "ex-gay" and preaching that there is only does harm to others. In the meantime, look out for him on Grindr.