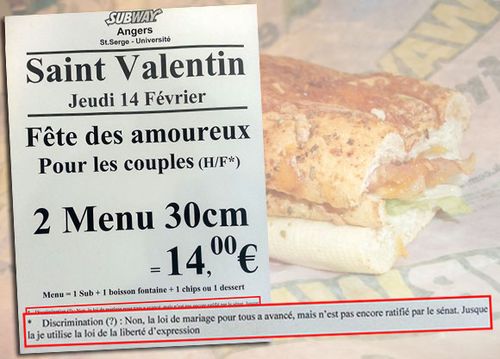 The owner of a Subway franchise in Angers, France, thought he would pull a Dan Cathy by using his fast food signage to discriminate against gay people.

On Valentine's Day, the owner posted a sign advertising a "feast of love for couples (M/F);" then, at the bottom of the poster, he included the self-defense, "Discrimination: No, the marriage for all law has advanced, but has yet to be ratified by the Senate. Until then, I'll use my freedom of expression."

Naturally, this being the 21st Century, the hateful message was soon spread across Twitter and Facebook, prompting executives at Subway France to temporarily close that store's location and release an apology.

The SUBWAY brand is strongly committed to maintaining the values ​​of diversity and inclusiveness in its restaurants around the world and does not endorse in any discrimination of any kind.

We apologize to all those people who felt offended by the individual promotional initiative for Valentine's Day of a restaurant in Angers, France.

Subway officials called the owner a "marginal case" and are looking into filing sanctions against him.