Hewlett-Packard CEO and former California gubernatorial candidate Meg Whitman, who signed her name to an amicus brief being filed this week by more than 80 Republican lawmakers and political leaders, explained today in a LinkedIn post her decision to sign the brief opposing Proposition 8: 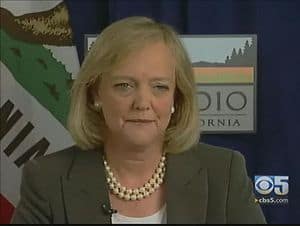 I have come to embrace same-sex marriage after a period of careful review and reflection. As a candidate for governor three years ago, I supported Proposition 8. At the time, I believed the people of California had weighed in on this question and that overturning the will of the people was the wrong approach. The facts and arguments presented during the legal process since then have had a profound impact on my thinking.

In reviewing the amicus brief before deciding to put my signature on it, one passage struck an immediate chord with me. In explaining his own support for same-sex marriage, British Prime Minister David Cameron once said, “Society is stronger when we make vows to each other and support each other. So I don’t support gay marriage despite being a conservative. I support gay marriage because I am a conservative.”

During my business career, I have lived by a philosophy I refer to as “the power of many.” I truly believe that what we can do together, none of us can do alone. By leading from this principle, I have been able to manage thriving organizations that have delivered great results. I believe the same holds true for society at-large. We are simply better when we are bonded together.

Marriage is the fundamental institution that unites a society. It is the single greatest contributor to the well-being of adults and children because it promotes eternal principles like commitment, fidelity and stability. It makes no difference whether the marriage is between a man and woman or a woman and woman. Marriage makes society better.

Whitman also outlines the contents of the brief, and in justifying her change-of-mind cites President's Obama's decision to come around in support of marriage equality last year.

The core argument of the amicus brief is that there is no legitimate, fact-based reason for providing different legal treatment of committed relationships between same-sex couples. Without the presence of such a rationale, precedent should result in the U.S. Supreme Court overturning California’s ban on gay marriage.

The amicus brief argues that the oft-cited claims that civil marriage between same-sex couples will somehow hurt traditional marriage and be detrimental to children have been rejected by social science. Rather, we now know that children who grow up in intact, married families are much more likely to do well in school, achieve professional success and enjoy the benefits of stable, adult family lives.

In contrast, children who live with unmarried, cohabitating partners encounter significant challenges in their lives due to the higher separation rates of their parents and lower household incomes. Laws like California’s Proposition 8 do not fortify traditional marriage, they merely prevent hundreds of thousands of children of same-sex couples from enjoying the benefits that accrue from marriage.

Like several others who have either sought or held public office, including President Obama, I have changed my mind on this issue. Same-sex couples and their children should have equal access to the benefits of marriage.

My decision to support civil marriage is solely my own. I hope that the Supreme Court will heed the arguments in the amicus brief. Establishing a constitutional right of marriage equality in California will strengthen our nation as a whole.