The push for marriage equality is on in Minnesota, with bipartisan support, MPR reports: 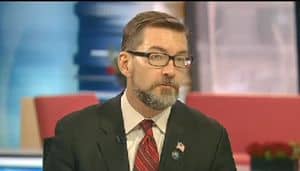 "This is a day to be very very proud to be a Minnesotan," Dibble said. "Because Minnesotans have rallied around this unifying, this clarifying discussion about the power of love in our lives."

Dibble said he doesn't know if there are enough votes now to pass the bill, but he believes they're close. He said he expects supporters to engage with their legislators on the issue in the coming weeks.

Said Petersen in a statement:

"As a strong proponent of limited government, conservative principles and individual liberty, I am proud to add my name as a co-author of legislation to secure the freedom to marry for same-sex couple in Minnesota."

Opponents of the bill are holding an afternoon news conference.

NOM has pledged $500,000 against lawmakers like Petersen who vote for the bill. Petersen has said he's not afraid: