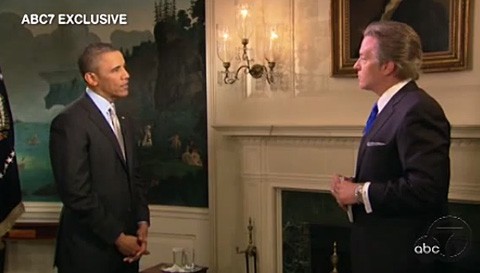 President Obama was asked directly by KGO-TV's Dan Ashley in an interview last night whether he would file an amicus brief in the Proposition 8 case before the Supreme Court as the February 28 deadline approaches.

"The solicitor general is still looking at this. I have to make sure that I'm not interjecting myself too much into this process particularly when we're not a party to the case. I can tell you, though, obviously my personal view, which is that I think that same-sex couples should have the same rights and be treated like everybody else. And that's something that I feel very strongly about [and] my administration's acting on wherever we can."

Obama's remarks coincide with an Associated Press report in which an anonymous White House source indicated that the President was weighing the decision:

A final decision on whether to file a brief has not been made, a senior administration official said. Solicitor General Donald Verrilli is consulting with the White House on the matter, said the official, speaking only on condition of anonymity because the official was not authorized to address the private deliberations publicly.

While the Justice Department would formally make the filing, the president himself is almost certain to make the ultimate decision on whether to file.

Watch the interview, AFTER THE JUMP.…