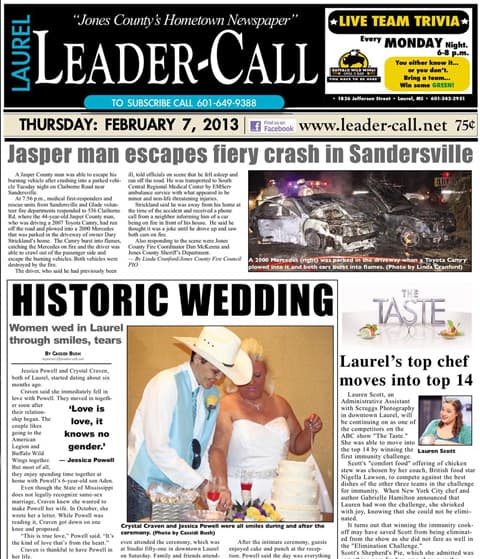 This is the front page of the February 7 edition of the Laurel Leader-Call, a newspaper in rural Mississippi which found itself the target of so much hate mail for publishing a story about the wedding of Jessica Powell and Crystal Craven, that the editor was compelled to publish an editorial on Saturday defending it, Yahoo's The Lookout reports.

Though same-sex marriage isn't legal in Mississippi, the couple, one of whom battles brain cancer, exchanged vows and the paper felt it significant to recognize the first ceremony of its kind in the county.

The job of a community newspaper is not pretending something didn't take place or ignoring it because it will upset people. No, our job is to inform reads what is going on in our own and let them make their own judgments. That is exactly what we did with the wedding story. Our reporter heard about the wedding, attended it, interviewed some of the participants and wrote a news story. If there had been protestors at the wedding, we would have covered that the exact same way … but there weren't any. We never said it was a good thing or a bad thing, we simply did our job by telling people what took place….

…We have stories about child molesters, murders and all kinds of vicious, barbaric acts of evil committed by heinous criminals on our front page and yet we never receive a call from anyone saying 'I don't need my children reading this.' Never. Ever. However, a story about two women exchanging marriage vows and we get swamped with people worried about their children.

…We were simply reporting to the best of our ability. However, I can't help but be saddened by the hate-filled viciousness of many of the comments directed toward our staff … No one here deserves to be berated or yelled at simply because we were doing our job.

Previous Post: « Towleroad Guide to the Tube #1312
Next Post: Lawrence O’Donnell Salutes CPAC for Inviting ‘Biggest Loser of Them All’ Mitt Romney: VIDEO »