Russian wrestling coach Vladimir Uruimagov claimed on Tuesday that the decision by the International Olympic Committee’s Executive Board to cut wrestling from the 2020 Olympic games is the doing of gay activists who want to wipe masculinity from the world," R sport reports: 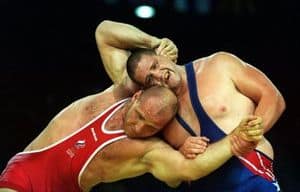 “If they expel wrestling now, that means that gays will soon run the whole world,” said Uruimagov, saying it was "a blow to masculine origins. Uruimagov added: "It turns out this committee is headed by representative of these [sexual] minorities."

Previous Post: « A Gay Home Decor Ad That Will Make You Want to Elope: VIDEO
Next Post: Be Prepared to Fall in Love with Gail and Audrey, Who Recently Got Married After 12 Years: VIDEO »