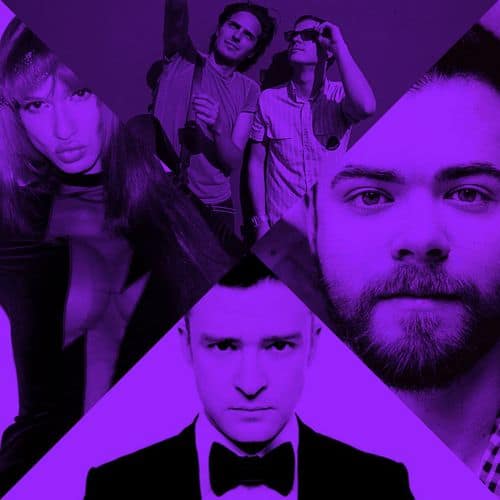 Ali Love is the voice behind Hot Natured's essential tune, 'Benediction'. His latest track, 'Emperor,' which releases April 1st, falls in suit with 'Benediction' with its soulful vocal styling, courtesy of Love, and energetic drum fills. UK-based Waze & Odyssey transform the disco infused original track into a lively house anthem that is sure to be a hit on the dancefloor.

€urocrats is a new musical project by two producers that are no strangers to this column: Dimitri From Paris and Aeroplane. While collaborations by hit producers are certainly on trend these days (see Hot Natured, DuTonc, and others), I am especially excited to hear what two of my absolute favorite DJs can come up with. The disco dons' new EP, Unite, has an impressive list of remixes from the likes of Fingerpaint and Busy P but it's Eliot's Rollerblade Vocal Remix of 'Follow Me' that is my favorite. The tropical 80's pop production by Eliot perfectly complements the New Order-ish vocals, creating a catchy track that transports you back in time.

Eli Escobar and Nomi Ruiz: 'Somebody to Love Me'

Eli Escobar & Nomi Ruiz's cover of Mark Ronson & Boy George's 2010 hit, 'Somebody to Love Me,' finally sees an official release on Escobar's forthcoming EP, Somebody To Love Me/Drifting, which drops on February 26th. Escobar's piano and saxophone laden production emphasizes the house elements of the song while the lyrics take an interesting twist when the openly transgendered Ruiz croons "I want somebody to be nice, see the boy I once was in my eyes."

L.A.-based DJs and production duo Classixx will release their debut LP, Hanging Gardens, this May. The lead single, 'Holding On,' has a churning disco rhythm reminiscent of classics like Earth, Wind & Fire's 'September,' with the addition of a thumping 4×4 beat that lures you to the dancefloor. The fading strings and house pianos create a dreamy element that is supplmented by a soulful disembodied vocal sample providing the catharsis that keeps me "holding on."

Although the Scissor Sisters are on hiatus, that's not stopping bandmember Del Marquis from making music. Del's solo debut, Slow Nights, won't be released until spring but he has teamed up with NYC's Xavier to release a six song mixtape, Tickle, which includes material that is "a little less serious" than the work on Del's album. Marquis refers to the mixtape as perverted and utempo, which would explain the decision to cover of Jermaine Jackson's disco jam, 'Let Me Tickle Your Fancy.' Enjoy the titillating, semi-NSFW (the model dances around in a jockstrap) video here.

Über producer Gigamesh proves he still has the magic with his latest single, 'Enjoy.' The song borrows a vocal sample from Wham!’s 1982 hit single 'Wham! Rap (Enjoy What You Do),' creating a feel-good dancefloor-filler that's only enhanced by the disco funk beats Gigamesh is very well known for.

Faith Evan's 1998 hit 'Love Like This' is updated for 2013 by the L.A. Based Bixel Boys and turned into a soulful vocal house track. The simple, dreamy production hits all the right nostalgic elements without sounding dated. This song is available for free download on Bixel Boy's SoundCloud.

ColeCo: 'You're So Fine'

Toronto-based ColeCo tackles another one of Brandy's hits, the 1994 release 'Baby' with their latest, 'You're So Fine.' The duo has lent their signature tropical nu-disco sound to the track, creating a refreshing ditty that will have you longing for summer.

The queer run label Discaire Records is the brain child of NYC's very own Ryan Smith, Jacob and Robert of San Francisco's Honey Soundsystem, and London's John Shanks. Discaire is releasing Alien Alien's Nights EP next month, and included on the release is a track that is not for the faint at heart, 'Monday.' The song features night-stalking salsa hand claps, wild aboriginal sounds and an infectious vocal mantra, creating a dark house cut that's probably best enjoyed in the wee hours of the night.