Why is the Pope going to live in the Vatican after he retires?

Protection, according to Reuters: 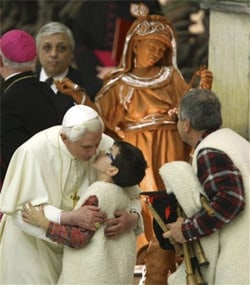 The final key consideration is the pope's potential exposure to legal claims over the Catholic Church's sexual abuse scandals.

In 2010, for example, Benedict was named as a defendant in a law suit alleging that he failed to take action as a cardinal in 1995 when he was allegedly told about a priest who had abused boys at a U.S. school for the deaf decades earlier. The lawyers withdrew the case last year and the Vatican said it was a major victory that proved the pope could not be held liable for the actions of abusive priests.

Benedict is currently not named specifically in any other case. The Vatican does not expect any more but is not ruling out the possibility.

"(If he lived anywhere else) then we might have those crazies who are filing lawsuits, or some magistrate might arrest him like other (former) heads of state have been for alleged acts while he was head of state," one source said.

And he can travel into Italy too:

The 1929 Lateran Pacts between Italy and the Holy See, which established Vatican City as a sovereign state, said Vatican City would be "invariably and in every event considered as neutral and inviolable territory".

There have been repeated calls for Benedict's arrest over sexual abuse in the Catholic Church.

Previous Post: « Beth Ditto and Gossip Want You to ‘Get a Job’: VIDEO
Next Post: Ellen Shows Off Entries from Her Male Underwear Model Search: VIDEO »