212 Democratic members of Congress led by Rep. Nancy Pelosi (D-CA) and Senator Dianne Feinstein (D-CA) including all seven out LGBT members and some who voted for DOMA in 1996 have asked the Supreme Court to strike it down in a brief submitted today in the Edith Windsor case, Buzzfeed's Chris Geidner reports: 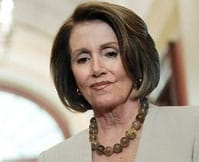 In summary, they agree with the Obama administration that laws like DOMA that classify people based on sexual orientation should receive heightened judicial scrutiny — but then go on to argue that DOMA is unconstitutional even if the court chooses not to proceed under such a heightened review:

A statement from the group said the amicus was filed because the members “want the Supreme Court to hear the full story from Congress, and to explain why they believe that Section 3 of DOMA is unconstitutional. They disagree with the arguments being made by lawyers hired to defend DOMA in court by the House Majority following the divided 3-2 vote of the House Bipartisan Legal Advisory Group (BLAG). The amicus brief filed today makes clear that BLAG does not speak for Congress, and that many members believe that Section 3 should be struck down because there simply is no legitimate federal interest in denying married same-sex couples the legal security, rights and responsibilities that federal law provides to all other married couples.”

Previous Post: « Towleroad Guide to the Tube #1318
Next Post: Every Amicus Brief Filed in the SCOTUS Prop 8 Case: READ THEM »